Society for Human Advancement and Disadvantaged Empowerment is a Non-government development organization. It works under a Board of Directors, that is a policy making body of the organization. The organization was established in 2003, however, it was properly registered in 2004 under the Social Welfare act of government of Baluchistan.

Create a Society which is based on Social justice and equality, where the rights of every member are respected and the duties are performed well, where prevails social harmony, peace and love for natural environment.

Our mission is to work for the empowerment of people (Women and Children) through advocacy, awareness raising and providing assistance, so that they could bring positive difference in their attitudes and become caring toward others and their natural environment for the creation of peaceful and environmentally friendly society.

·         Work against the issues of women violence like honor killing and domestic violence and empower women socially, politically and economically to enable them to assert for their rights.

Jaffarabad district is one of the backward areas of the Balochistan province of Pakistan. It has tribal set up, where the status of women in the society is very low. Women are considered below men. Domestic violence and Killing women on the name of honor is very common practice in the society of our focused area. Women in the area are not well aware of their rights, they consider violence as due right of men.

Participation of women in political activities is rare. Women Councilors are selected by the heads of tribes rather than taking part in the process of election. They do not attend to the meetings of their respective councils rather they are represented by their male partners.

At villages women work from dawn to dusk at the fields, later they cook for their family members take care of their children and animals at the households. They do not take the earnings from the field work rather it goes to their male members. The ratio of education in women is very low that is about 3%.

School going children work in the fields. Corporal punishment on children at schools and at households is common.

There is no basic infrastructure available. People live in slum areas. Pool and ponds of dirty water are seen every where due to lack of drainage system.

The total population of the area is about 625000 people and women make about 52% of the population. Due to tribal system conflicts among different tribes have created unrest in the area due to these conflicts many people have lost their precious lives.

In collaboration with Shirkat Gah legal awareness sessions at the community were conducted on filling of Nikah Nama (Marriage Contract) form, Inheritance and Divorce. The participants were sensitized about the legal status of the topics and awareness was given to women how can they resort the court of law and assert for their rights given o them by the religion and the law of the land. 10 legal awareness sessions were conducted at different villages by the organization. The purpose of these sessions is to sensitize women about their rights in accordance with the Muslim Family Laws ordinance.

Being a part of the WE CAN campaign of the Oxfam-GB, HADE organization conducted 16 community sessions against domestic violence and honor killings at 16 different villages of district Jaffarabad, where the number of such kind of violence is on rise and killing women on very petty issues on the name of honor is a mundane activity. The community sessions were conducted with the male community of the focused areas and they included farmers, teachers, heads f tribes, religious people and students. The participants were sensitized against such in-human practices. The SHADE organization identified 1200 CHANGE MAKERS. The change makers are the people who condemn women violence.

The SHADE organization celebrates Women week every year on the eve of International Women Day on March 08. The organization arranges number of activities from 1st to 08 March. The SHADE organization very first time in the area introduced celebrating the event. The activities include Conventions, Seminars, Workshops, and Dialogues, Talk shows, Women sports, Signature Campaigns and preparation of documentary films. The main purpose of this activity is to show solidarity with the women of the world and sensitize people about women rights and against domestic violence and honor killing issues, which are very common in the area. 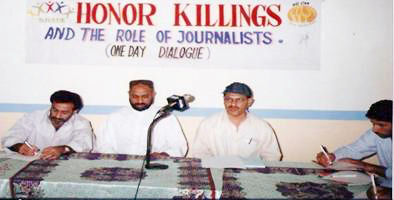 Dialogue With Journalists of District Jaffarabad

The SHADE organization in collaboration with Shirkat Gah conducted a research on Honor killing issues in the focused area of Jaffarabad district. We collected and prepared case studies of the honor killing cases by going into the specific area and meeting the relative and neighbors of the victim families. We went to the hospitals and police stations to collect necessary information.

With the support of Shirkat Gah; the SHADE organization conducted a Mapping Research selecting 8 Union Councils of Jaffarabad district. The main purpose of the research was to collect information about the role of Nazims and Musalihat Anjumans (Arbitary Councils) in the solution of women issues and filling of Nikah Nama (Mariage Contracts).

Like International Women Day, The SHADE organization celebrates 16 days of activities against gender violence from November 25 to December 10 every year. The organization arranged a one day seminar on eve. Mr. Tufail Ahmed Hashmi a well known religious scholar was invited to sensitize people about the religious aspect against honor killing and domestic violence and about women rights and the rights of men. About 200 women and men participated in the seminar.

·         The organization Celebrates World Environment Day every year on June 05.On the eve of the day different activities are organized by the organization like a seminar, a student rally and plantation. The purpose is to sensitize the community about environmental education so that they could do environmentally friendly activities for the promotion of environment in the area.

·         The organization conducted 08 mini lectures and orientation sessions at different schools and colleges to sensitize people about climate change and its hazards due to environmental degradation.

Plantation at High School Usta Muhammad on the eve of WED 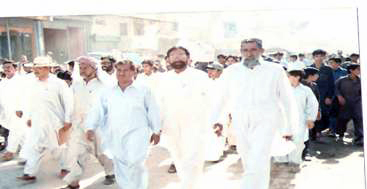 Participants of a rally on the eve of World Environment day 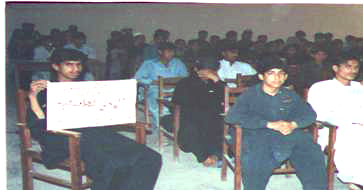 A lecture at high school on Climate Change 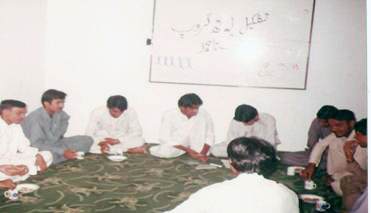 Activity with the youth group at SHADE office 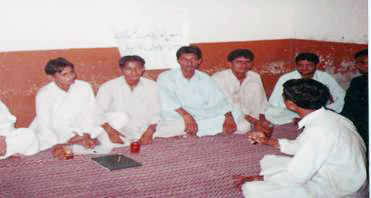 The area our organization focuses has no basic infrastructure. At the streets and Mohallahs there is no proper drainage system. Pools and ponds of dirty water are seen everywhere. We selected on the need bases two colonies i-e Firdous colony and Qurban colony. They are thickly populated and highly underdeveloped as compared to rest of the areas. Drains and Brick pavements of 07 streets were constructed at Firdous colony and with the support of TVO and of 02 Streets were constructed with the support of SPO at Qurban colony. 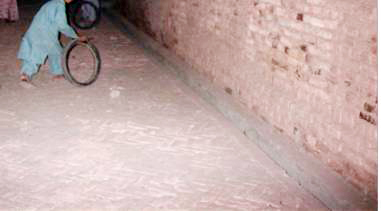 Construction of a street at Firdous Colony 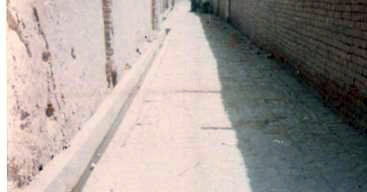 Construction of a street at Qurban Colony

With the support of referral unit of Sahil organization in the district the SHADE organization provided legal aid to 02 cases of child victims of sexual abuse.

In collaboration with Shirkat Gah, SHADE organization monitored elections in 2008 in the area of district Jaffarabad Baluchistan. The main purpose of the election monitoring was to observe the role of women in contesting election, their participation in the election campaign and their voting on the poling day.